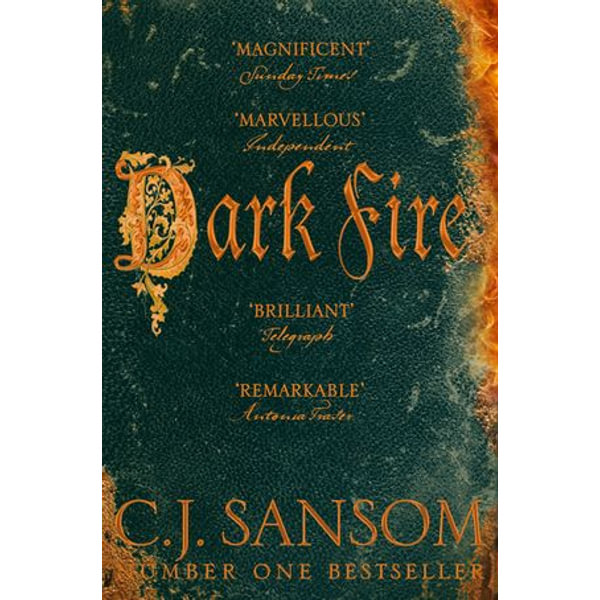 Winner of the CWA Ellis Peters Historical Dagger, Dark Fire is the second thrilling historical crime novel from C. J. Sansom.Summer, 1540. Matthew Shardlake, believing himself out of favour with Thomas Cromwell, is busy trying to maintain his legal practice and keep a low profile. But his involvement with a murder case, defending a girl accused of brutally murdering her young cousin, brings him once again into contact with the King's chief minister - and a new assignment . . .The secret of Greek Fire, the legendary substance with which the Byzantines destroyed the Arab navies, has been lost for centuries. Now an official of the Court of Augmentations has discovered the formula in the library of a dissolved London monastery. When Shardlake is sent to recover it, he finds the official and his alchemist brother brutally murdered - the formula has disappeared.Now Shardlake must follow the trail of Greek Fire across Tudor London, while trying at the same time to prove his young client's innocence. But very soon he discovered nothing is as it seems . . .About the AuthorC.J. Sansom was educated at Birmingham University, where he took a BA and then a PhD in history. After working in a variety of jobs, he retrained as a solicitor and practised in Sussex, until becoming a full-time writer. Sansom is the bestselling author of the acclaimed Shardlake series, the Spanish Civil War thriller Winter in Madrid and the lauded alternative history novel Dominion. He lives in Sussex.
DOWNLOAD
READ ONLINE

It is 1540 and the hottest summer of the sixteenth century. Matthew Shardlake, believing himself out of favour with Thomas Cromwell, is busy trying to maintain his legal practice and keep a low profile.

Set in the 16th century during the reign of Tudor King Henry VIII, it follows hunchbacked lawyer Shardlake's search to recover the long-lost formula for Greek fire. Dark Fire is the fifth book in The Last Dragon Chronicles by Chris d'Lacey. It was released on 2 July 2009 in the UK and was published on May 1, 2010 for the US. Winner of the CWA Ellis Peters Historical Dagger, Dark Fire is the second thrilling historical crime novel from C.