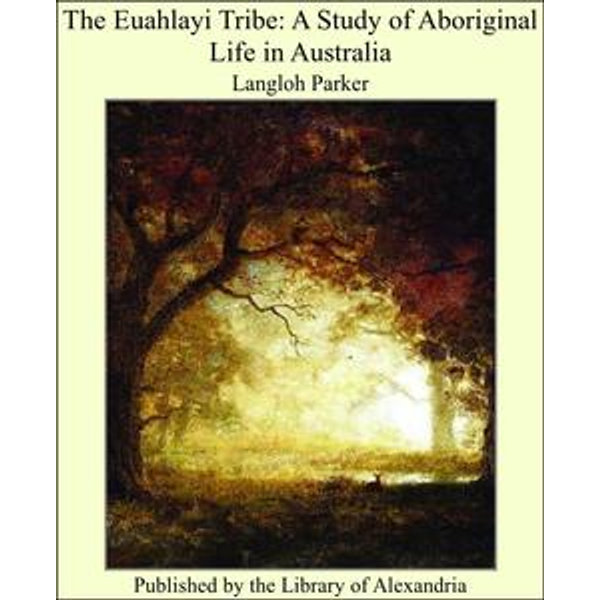 Mrs. Parker, on the Other hand, has had, as regards the women and children of the Euahlayi, all the advantages of the squire's wife in a rural neighbourhood, supposing the squire's wife to be an intelligent and sympathetic lady, with a strong taste for the study of folklore and rustic custom. Among the Zulus, we know, it is the elder women who tell the popular tales, so carefully translated and edited by Bishop Colenso. Mrs. Parker has already published two volumes of Euahlayi tales, though I do not know that I have ever seen them cited, except by myself, in anthropological discussion. As they contain many beautiful and romantic touches, and references to the Euahlayi 'All Father,' or paternal 'super man,' Byamee, they may possibly have been regarded as dubious materials, dressed up for the European market. Mrs. Parker's new volume, I hope, will prove that she is a close scientific observer, who must be reckoned with by students. She has not scurried through the region occupied by her tribe, but has had them constantly under her eyes for a number of years. My own slight share in as it stands ought to be mentioned. After reading the original MS., I catechised Mrs. Parker as to her amount of knowledge of the native language; her methods of obtaining information; and the chances that missionary influence had affected the Euahlayi legends and beliefs. I wrote out her answers, and she read and revised what I had written. I also collected many scattered notices of Byamee into the chapter on that being, which Mrs. Parker has read and approved. I introduced a reference to Mr. Howitt's theory of the 'All Father,' and I added some references to Other authorities on the Australian tribes. Except for this, and for a very few purely verbal changes in matter of style, Mrs. Parker's original manuscript is untouched by me. It seems necessary to mention these details, as I have, in Other works, expressed my own opinions on Australian religion and customary law.[MAKING OF RELIGION, second edition; MYTH, RITUAL, AND RELIGION, second edition.] These opinions I have not, so to speak, edited into the work of Mrs. Parker. The author herself has remarked that, beginning as a disciple of Mr. Herbert Spencer in regard to the religious ideas of the Australians--according to that writer, mere dread of casual 'spirits'--she was obliged to alter her attitude, in consequence of all that she learned at first hand. She also explains that her tribe are not 'wild blacks,' though, in the absence of missionary influences, they retain their ancient beliefs, at least the old people do; and, in a decadent form, preserve their tribal initiations, or Boorah. How she tested and controlled the evidence of her informants she has herself stated, and I venture to think that she could hardly have made a better use of her opportunities
DOWNLOAD
READ ONLINE

Langloh Parker "This is an effort by K. Langloh Parker to describe in formal terms her und... The Euahlayi Tribe: a Study of Aboriginal Life in Australi‪a‬ K.

The following pages are intended as a contribution to the study of the manners, customs, beliefs, and legends of the Aborigines of Australia. The area of my observation is mainly limited to the region occupied by the Euahlayi tribe of north-western New South Wales, who for twenty years were my neighbours on the Narran River.