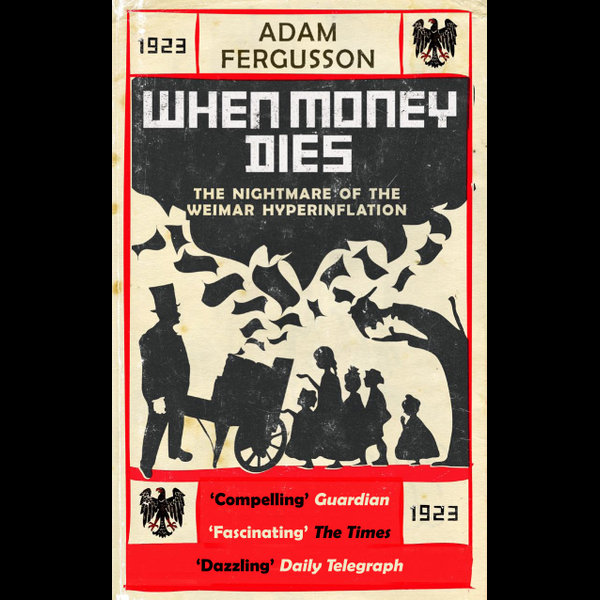 This is, I believe, a moral tale. It goes far to prove the revolutionary axiom that if you wish to destroy a nation you must corrupt its currency. Thus must sound money be the first bastion of a society's defence. In 1923, with its currency effectively worthless (the exchange rate in December of that year was one dollar to 4,200,000,000,000 marks), the Weimar Republic was all but reduced to a barter economy. Expensive cigars, artworks and jewels were routinely exchanged for staples such as bread; a cinema ticket could be bought for a lump of coal, and a bottle of paraffin for a silk shirt. In desperation, the Bavarian Prime Minister submitted a Bill to the Reichsrat proposing that gluttony be made a penal offence, his exact definition of a glutton being 'one who habitually devotes himself to the pleasures of the table to such a degree that he might arouse discontent in view of the distressful condition of the population'. Since its first publication in 1975, When Money Dies has become the classic history of these bizarre and frightening times. Weaving elegant analysis with a wealth of eyewitness accounts by ordinary people struggling to survive, it deals above all with the human side of inflation: why governments resort to it, the dismal, corruptive pestilence it visits on their citizens, the agonies of recovery, and the dark, long-term legacy. And at a time of acute economic strain, it provides an urgent warning against the addictive dangers of printing money -- shorthand for deficit financing -- as a soft option for governments faced with growing unrest and unemployment.
DOWNLOAD
READ ONLINE

Not only for Germans, but also Austrians and Hungarians grappling with their own political upheavals and currency crises in the 1920s. In a particularly poignant chapter, Fergusson describes the travails of a Viennese widow named Anna Eisenmenger. Ryan McMaken joins the show to discuss Adam Fergusson's seminal history of Weimar-era hyperinflation in Germany, When Money Dies.

It will make a hell of a story if anyone survives to tell it. Meanwhile, read "When Money Dies", and enjoy the misery of others experiencing the cruelty of history, enhanced by the existential unease of suspecting that something similar in origin, if not in outcome, could occur again. 1975, When money dies : the nightmare of the Weimar collapse / [by] Adam Fergusson Kimber London.