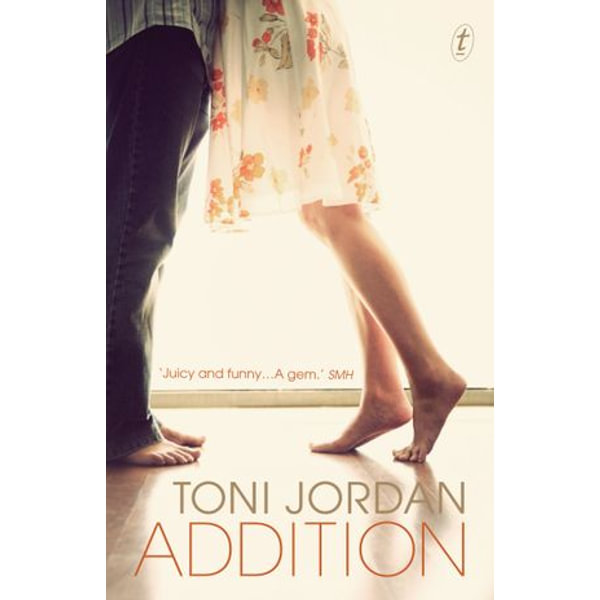 Winner of the Best Debut Fiction, Indie Awards, 2008 and longlisted for the Miles Franklin Award, 2009.Addition is a stylish, moving love story. Grace is witty, flirtatious and headstrong. She's not a bit sentimental but even so, she may be about to lose track of the number of ways she can fall in love.Grace Lisa Vandenburg counts.The letters in her name (19). The steps she takes every morning to the local cafe (920); the number of poppy seeds on her slice of orange cake, which dictates the number of bites she'll take to finish it.Grace counts everything, because numbers hold the worlds together. And she needs to keep an eye on how they're doing.Seamus Joseph O'Reilly (also a 19, with the sexiest hands Grace has ever seen) thinks she might be better off without the counting. If she could hold down a job, say. Or open her kitchen cupboards without conducting an inventory, or make a sandwich containing an unknown number of sprouts. Grace's problem is that Seamus doesn't count. Her other problem is, he does.Toni Jordan was born in Brisbane. She has worked as a sales assistant, molecular biologist, quality control chemist and marketing manager. In 2006 she received a Varuna Awards master class for Addition. Her second novel, Fall Girl, was released in 2010. Toni now lives in Melbourne where she works as a freelance copywriter.'A stylish, witty and moving love story.' Sigrid Thornton'A gemlike debut - think The Curious Incident of the Dog in the Night-Time thrown into the world of chick-lit...This romantic comedy weighs the value of a normal life against the hidden potential in a life of dysfunction. At the book's close, it's up to Seamus to accept Grace for who she is...A smartly written comedy that cheekily suggests recovery may not be for everyone.' [starred review] Kirkus Reviews'This tremendously enjoyable novel is a romantic comedy with a light touch and a quirky and unforgettable central character.' Adelaide Advertiser'Toni Jordan has created such a real character in Grace that you are cheering her on, willing her to get to the top of the staircase, intact and unharmed. Jordan's voice is distinctive, refreshing and...her debut novel is juicy and funny...this is a gem.' Sydney Morning Herald'This is a delightful first novel, serious and sometimes sad, but full of charm and humour...Toni Jordan is a novelist to look out for.' The Press'An excellent debut novel...A light and lovely story that champions being different in a world where being different is treated with suspicion...Grace is as nutty as a fruitcake but funny, and runs an internal commentary on life that is sassy and astute...With Addition, Toni Jordan strikes a fabulous blow for resolute individuality and without spoiling the ending, redemptive love dies play a supporting role.' Sunday Telegraph'Jordan's book is snappy, sassy, superior...It's a nice twist to the tired chick-lit formula of girl-meets-boy-and-mutual-transformation-ensues, and a deftly handled debut novel.' Canberra Times
DOWNLOAD
READ ONLINE

Read More on This Topic reaction mechanism: Addition reactions Reactions in which a multiple bond between two atoms becomes partly or fully saturated by covalent attachments at both centres are called... Find 195 ways to say in addition, along with antonyms, related words, and example sentences at Thesaurus.com, the world's most trusted free thesaurus. Free online math addition games for kids. Practice the addition facts while having fun at Multiplication.com. 1.

The word addition also refers to the act of adding. More generally, it refers to an increase or boost applied to something.