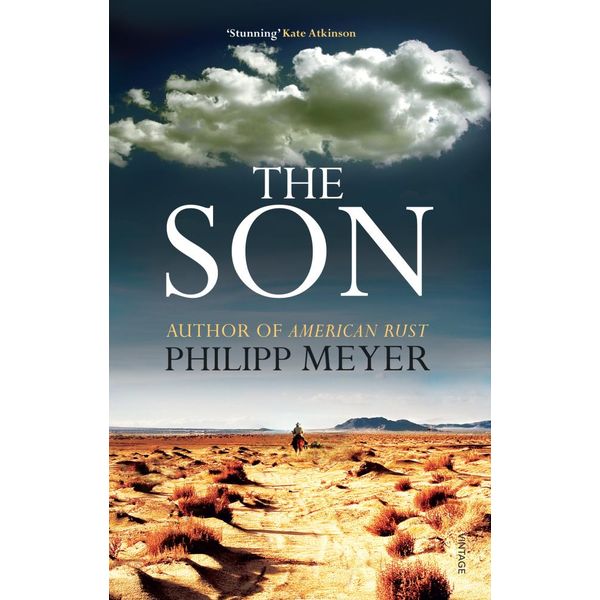 An epic journey spanning a century and a half in Texas, America.Eli McCullough was born in 1836, the year that the Republic of Texas was declared an independentstate. He was the first child of this new republic. Eight years later he and his brother are kidnapped. They are left with nothing, barely their lives, whilst Eli watches his sister being raped and killed.Slowly he learns the ways and life of the Comanches as they battle to survive themselves against the incursions of the white settlers. But his progress within the tribe is matched by the tribe's own perilous journey, as an epidemic endangers their future. Eli is forced to leave the tribe and pursue his life elsewhere. He falls in love has children and becomes a Ranger working for the Government, but finds it hard to break his Comanche memories and ways. He lives to be 100 and tells his remarkable story.Eli's son Peter McCullough endures the First World War and several Mexican attacks. His diaries tell of momentous and dangerous times as he tries to maintain the dynasty begun by his father, now named the Colonel.At the age of eighty-six Jeanne Anne McCullough is the fifth richest woman in Texas, She has had a fall and is perilously close to death. She goes in and out of consciousness and tells her own history; battling to keep the family alive; battling to prevent the large-scale acquisitive oil companies from buying her land; battling to hold on to her largesse and her legacy.Three stories of one family combine to produce nothing less than a standout epic of and for our time.About the AuthorPhilipp Meyer grew up in a working class neighborhood in Baltimore. His mother is an artist; his father worked as an electrician, cabinet maker, and art installer before becoming a college science instructor. The neighborhood, Hampden, had been devastated by the collapse of various heavy industries, and crime and unemployment were rampant. Meyer attended city public schools until dropping out at age 16. He spent the next five years working as a bicycle mechanic and occasionally volunteering at Baltimore's Shock Trauma Center. At age 20, he began taking classes at a variety of colleges in Baltimore and decided to become a writer. He also decided to leave his hometown, and at 22, on his third attempt at applying to various Ivy League colleges, he was admitted to Cornell University. He graduated with a degree in English and a mountain of debt and headed for Wall Street to pay off his student loans. After getting a job with the Swiss investment bank UBS, Meyer did training in London and Zurich and was assigned to an elite group of derivatives traders, jokingly referred to as the genius desk. After several years at UBS, he'd paid off most of his student loans and decided to pursue his dream of becoming a writer. When his savings ran out he took jobs as an emergency medical technician and construction worker. He was preparing for a second career as a paramedic when he received a fellowship at the Michener Center for Writers in Austin, TX. In 2008 he received an MFA from the Michener Center for Writers. In 2010 he received a fellowship from the John Simon Guggenheim Memorial Foundation. He has also received fellowships or residencies from MacDowell, Yaddo, Ucross, Blue Mountain Center, and the Anderson Center for the Arts. His novels include American Rust and The Son.
DOWNLOAD
READ ONLINE

Pete grows closer to Maria while Eli brings Phineas in on a dangerous secret.The tribe faces an unexpected return .The Son Season 2Eli's plan for the future forces Pete into a life-or-death decision about his loyalties.Meet the McCulloughs, a rising ... 'The Son' has gripping, unrelenting action, bent coppers, drug dealers, human traffickers, the dregs of the underworld, and then there's Sonny Lofthus (The Son), who is on a mission to rid the world of some very unpleasant characters, to avenge the death of his police officer father. Summary: Eli McCullough (Pierce Brosnan) was kidnapped by the Comanches at 13 and grows into a ruthless businessman, his oldest son Pete McCullough (Henry Garrett) struggles with his father's brutality and making his own way, while Pete's daughter Jeannie McCullough (Sydney Lucas) seeks to escape the many expectations of being a woman in this epic The Son'a were an interstellar power, originating from Ba'ku, from which they were exiled in the late- 23rd century. They were nomadic, though they maintained outposts.

But after setting off on an adventure to solve the mystery once and for ... The Son 2019 | TV-MA | 1h 32m | Movies Based on Books In this psychological thriller, painter Lorenzo's life spirals out of control as he fears his wife is trying to isolate him from their infant son. Directed by Jeremy Degruson, Ben Stassen. With Cinda Adams, Mari Devon, Kirk Thornton, John Allsopp.