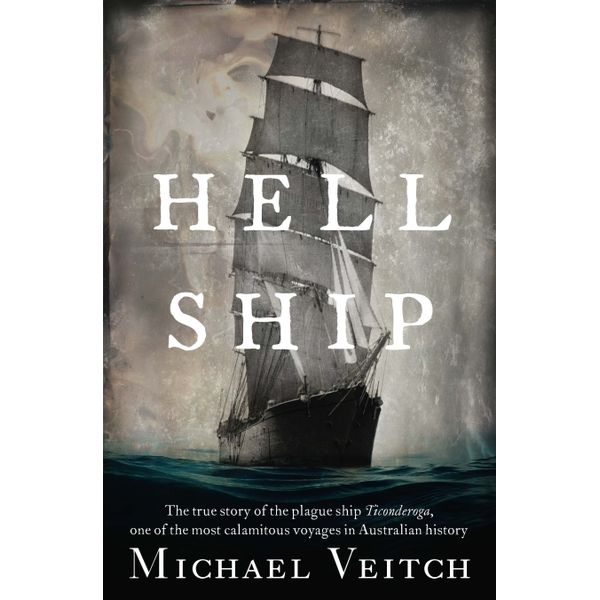 In the summer of 1852 a ghost ship rounded the heads of Port Phillip Bay. It was the clipper Ticonderoga, three months out from Liverpool, carrying emigrants from the Highlands of Scotland to a new life in Australia. When she'd set out, almost 800 of them were crowded into her 170 foot hull. The first death happened just a few weeks into the voyage, a sixteen year old girl named Anna-Maria Hando. The next victim, fourteen year old Margaret Doyle, died as the ship rounded the Cape of Good Hope. The symptoms were identical: a burning temperature, followed by delirium, then quickly, death. Within days another followed, this time a baby, then another. Typhus, one of the great scourges of overcrowded jails, slums and ships, had taken hold. Soon so many bodies were going over the side that the ship ran out of sail cloth and weights to bury them in. Dozens of sharks followed the ship, waiting. What the Ticonderoga was to experience over the next weeks was a floating hell. After her captain and most of his officers had all succumbed to the fever, it was left to the surgeon's mate, a young Scotsman only recently graduated, to tend to the sick and dying as he could and rally what few defenses they had against the plague ravaging the ship. When at last the ship arrived in Port Phillip Bay, and the story of the dreadful voyage emerged, panic struck Melbourne. Special editions of newspapers were rushed out, bringing bulletins of the now infamous 'fever ship' or 'plague ship' to a population both fascinated and terrified of the disease. The ship was quarantined and the survivors landed and kept in isolation at what became known as Ticonderoga Bay. The young surgeon's mate worked tirelessly with a young woman called Annie, who acted as his nurse, trying to save those he could in the primitive conditions of a tented camp on the shoreline. More than a quarter of those 800 emigrants died from the fever, and hundreds of others had been struck down but survived. A Royal Commission was established, and conditions in other emigrant ships were to be improved as a result. The young surgeon's mate, James William Henry Veitch, married his helper, Annie. Michael Veitch is his great-great grandson. Hell Ship is a brilliantly researched and gripping narrative account of the voyage, based on eye witness testimony, letters, subsequent accounts, and the evidence of the Royal Commission. It is dramatic, compelling and filled with human stories and the claustrophobic horror of a plague stalking a community that's isolated and beyond help.
DOWNLOAD
READ ONLINE

Buy a discounted Paperback of Hell Ship online from Australia's leading online bookstore. Hell Ship: The Journey of The Ticonderoga Session Times Friday 12 March, 1.30pm Friday 12 March, 7pm Pricing. Member $19, Full $21, Group 10+ $19ea Lunch at noon additional $23 $1.50 per ticket booking fee applies for online bookings If you are using a gift card to purchase your tickets and are experiencing difficulties, this may be due to us transitioning to a new ticketing system.